Last month, Gao Youwei Wu Guowei collected a piece of jade, claiming to be the funerary of the tomb of Liu Guang, the tomb of Han Guangling. At that time, the newspaper invited Xia Meizhen, the old director of the Han Guangling Tomb Museum, to identify it through pictures. Xia Meizhen said For the identification of cultural relics, we must see it as a matter of fact.

Yesterday, at the invitation of this newspaper, Xia Meizhen and her husband Yin Zhihua went to Gaobao on-site treasure. 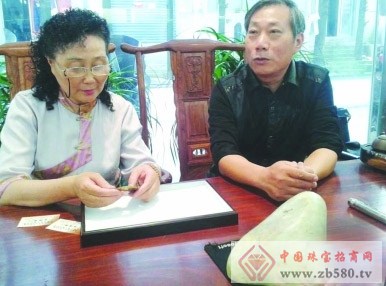 Archaeologists smile at each other: it is indeed the Han Dynasty

Yesterday, at the invitation of this newspaper, along with two experts, drove to Gaoyou for Jianbao. This piece of jade, the secretary of the Gaoyou Gem and Jade Research Association, is 6.4 cm in outer diameter and 2.3 cm in inner diameter. The material is Hetian jade, and the jade has a mottled, foggy brown-yellow block. Wu Guowei introduced that this ancestral thing was the ancestor of his ancestors more than 200 years ago, and has been passed down to this day. In the 1990s, Taiwanese people had found the place he wanted to buy and was categorically rejected. Tightly connected with Yuxi, there is also a five-dollar coin. This small copper coin is inside the outer circle. On both sides of the square hole, the word "five é“¢" is cast from the right to the left.

At the Jianbao scene, Xia Meizhen sat side by side at the table. Xia Meizhen took the jade from the tray with the velvet pad, the left hand held the jade, the right hand picked up a magnifying glass, and looked at the jade carefully, then took it again. Start with a small, small flashlight that is illuminated on the jade.

A few minutes later, Xia Meizhen showed a smile, and handed the jade to the husband next to him. Yin Zhihua carefully took the jade, put it in the palm of his hand, felt the texture of the skin, studied the craft of the jade, and the surrounding The air solidified to the extreme, everyone calmed down and waited for the final conclusion. After a few minutes of silence, the couple both turned their faces and the dagger smiled and made a common conclusion: This is a real Han Dynasty jade!

Yin Zhihua said that from the glazed skin and crafts of this jade, it is very different from the modern jade, especially the degree of its ochre is the baptism of the years, revealing the ancient meaning. "Only Han Yu will have such a twilight color, which shows that it has a long history." Yin Zhihua introduced that from the perspective of the round hole process in the center of Yuxi, it can also be seen that it is a Han Dynasty product. The rules are in line with the characteristics of the Han Dynasty."

Hearing this conclusion, Wu Guowei, who was waiting for the results on the side, finally let go of his heart. "I knew that this is a piece of ancient jade, but I have never had the authoritative conclusion of the expert. I always feel that I am not practical. Now I am, I have taken a reassurance." Wu Guowei said with a smile.

However, for this piece of jade, whether it is the funerary object in the tomb of Han Guangling Wang Liu, the two experts said that it is not enough to prove that it is the item flowing out of the tomb of Liu Yuâ€™s mausoleum because of the existing physical evidence. There is no inscription or other evidence to prove his identity. Although it is a piece of ancient jade in the Han Dynasty, there are too few other effective information, so it is difficult to determine that it is the funerary of Liu Yuâ€™s tomb.

In the same year, a total of five pieces of jade were unearthed from the tomb of Han Guangling.

Yin Zhihua recalled that since 1979, the Nanjing Museum has taken the lead, and his Yangzhou Museum, Gaoyou Art Management Committee and Nanjing University History Department have all sent personnel to participate in this high-profile archaeological excavation project, No. 1 and No. 2 The Han Tomb was excavated and the entire archaeological work was completed in two years. Yin Zhihua said that five jade oysters were unearthed at the time, mainly based on large-scale jade, and the jade of this size was rare.

Once enshrined in the Taoist generation

Wu Guowei expressed satisfaction with the conclusion given by the experts. "In my mind, it is the funerary object from Liu Yu's tomb." Wu Guowei said that he has two major supporting evidences to identify the "Liu Yu Tomb Funeral" status of Yuxi. First, the place where the jade was discovered was in the vicinity of Liu Yuâ€™s tomb. After that, there were few Han tombs unearthed in the area. Until recently, several small Han tombs were unearthed, and Liu Yuâ€™s tombs were buried in the last century. After seeing the sky in the early 1980s, I found a few pieces of jade, and combined with the history of the tombs that had been stolen, he concluded that "this small size of the jade is likely to be brought out of the tomb by the tomb thief." Lost in the nearby ground."

Wu Guowei introduced that this piece of jade is an ancestral thing uploaded from its grandfather, and there is still a long story to tell. As early as more than 200 years ago, a local fisherman picked up this jade and a five-dollar money near the tomb of the Shenjushan Han. In awe, the fishermen sent the jade and the five-dollar money to the double hood of Guoji Town. In this way, a Taoist temple is enshrined in this way. In this way, two treasures have been passed down from generation to generation by the Taoist. "My grandfather was an apprentice in this Taoist temple when he was a child. In one year, the local water was born, and the Taoist collapse will be appointed. Daochang died." Wu Guowei said that after the death of Dao, two things fell into the hands of his grandfather. After the death of his grandfather, Wu Guowei obtained this legacy from his grandfather, and he loved it and carefully kept it for years.