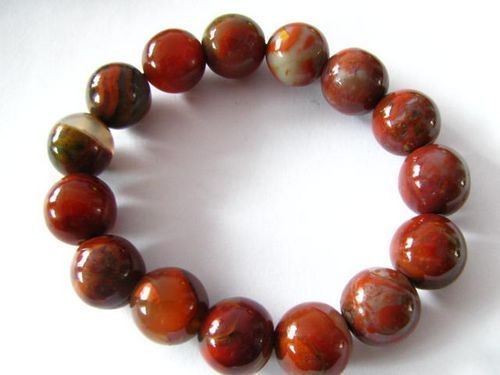 At present, the prices of jade jewelry such as Hetian jade and Jadeite have been pushed to high levels. Apart from high investment costs, the room for appreciation is limited. In the past two years, the price of a type of agate known as the â€œWarring States Redâ€ soared significantly in the collection market, setting a miracle in the history of agate that has tripled in price for three years. Because of its three colorful collection principles: brilliant colors, low output, low potential reserves, and low market awareness, the current warring nationâ€™s red agate may become another miracle of investment and collection.

The agate was used in the Warring States period, mostly in beads, olive-shaped, melon prismatic, and oblate; in the Qing agate, there were also carved pieces such as flowers, heads, rings, buttons, caps, and so on. The agate was used all the time. to date.

Among the various types of agate jade, the red agate has a beautiful color and a mysterious historical background. It is popular among people and is a unique variety of agate.

The Warring States Red Agate is a relatively rare agate species produced in the area of â€‹â€‹Fuxin and Chaoyang, Liaoning Province, where the agate capital of China is located. Most of the ore is from a beipiao hill. At present, the output is low, the potential reserves are not large, and the colors are beautiful. The Mohs hardness is about 6.5. It is opaque, brittle, and the stone is thick. It is difficult to engrave, and the rate of production is low. Therefore, most of the market saw bracelets or smaller carvings, semi-precious stone works or rough stones, rarely see large and medium-sized agate works.

The beauty of "Warring States Red Agate" lies in its rich and pure color, its quality Guanghua restrained and delicate. The colors are red, yellow, and white, and are more common in red clams. The red and agate of the Warring States Period is pure red and thick, similar to the red color of the soapstone; its yellow dignified and moist is like the brilliant of Tian Huang; its white is elegant and cloud-like. Red peony and yellow peony are more precious when they are set in one stone or all of them are yellow pods. Part of the Warring States red agate with white crystal crystal.

In the new, especially famous Shijiazi town, the Agate market, there are many manufacturers and business owners who process and manage the Warring States red agate, but there are fewer high quality people. Due to lack of resources, low production rates, and the government's prohibition of private unplanned mining, the ore prices are currently soaring. For the finished product of the Warring States Red Agate, because the raw material is precious, the beads are often hand-ground and uneven in size, and there are many stone skins; the small carved pieces, pendants, and handle pieces are also often carved because of their natural conditions, and are relatively rough and simple. Fine and highly valued works are rare. Even now, the price has been fluctuating.