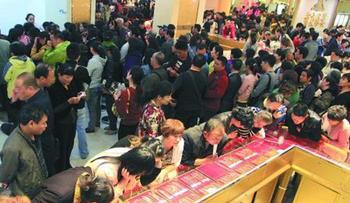 The Chinese mother buys gold as long as he buys it much cheaper than he did before and feels it makes money. It is not for short-term speculation. Just as many central banks in the world have begun to absorb gold at a low position; although gold has no currency function, for thousands of years, the world The widespread recognition of gold values â€‹â€‹throughout the country has laid the long-term value of gold. In mid-April this year, the international gold price plummeted and fell by 15% for two consecutive days. The domestic gold price has fallen, and this is not happy to be preparing for the wedding. May Day holiday, girlfriends and mom burst into the crowd of hundreds of Beijing cuisine, pick the dowry, in the dish hundred gold per gram of 378 yuan per shot, cheaper than before the fall of 20 pieces. A wedding Jiubao, a total of more than 200 grams, save four or five thousand. However, after the price of gold seemed to stabilize in early May, it also ushered in a wave of slumps in mid-May. It fell by nearly 10 yuan per gram, which was 369 yuan per gram, when the mother and daughter replied. The girlfriends and daughters of honey have changed from "bass-hunting" to "quilt-covering" in as little as two weeks.

However, the girlfriend's mom is very calm and calm: â€œThe dowry is always bought, after all, itâ€™s a lot cheaper than before, and now the gold is still in the hands of some. Although it has fallen, but it will rise in the future, we It's not a short-term investment.â€ There are not a few people who have the golden attitude of grabbing honey.

Therefore, some people jokingly stated that â€œChinese Auntieâ€ is playing against â€œWall Streetâ€, but it is completely different from the perspective of the investment style of both parties.

Most of the Chinese mothers are rushing to buy gold jewelry, which has both craft value and collection value. The price is higher than investment gold, and repurchasing is also more troublesome. It also requires handling fees. Aunts with a long-term investment mentality: as long as I feel cheaper than I bought before, buy today is not to sell tomorrow. They do not understand hype, and they do not care about the Fed or Wall Street. They only know how to keep the value of gold in their hands. It's really a bit of "value investing".

So, in the end should not buy gold? When did you buy gold? Before thinking about this issue, we must first calmly think about whether we stand on the Chinese aunt's position or stand on the short-term speculator's position on Wall Street.

If you invest in the long-term, you do not need to worry too much. Although gold does not have a monetary function, the universal recognition of the value of gold throughout the world has laid the long-term value of gold for thousands of years. In April, many central banks in the world absorbed a lot of gold at low prices. It is not difficult to see that the total amount of scarce gold, which also has the functions of reserves, decoration, and technical applications, is more reliable than the banknotes that can be printed out as long as the machine is turned on.

If you want short-term speculation to profit, gold as an investment tool, the price is bound to rise or fall, and even some people are looking forward to profit from the skyrocketing plunge. Therefore, it is best for small and ordinary people not to play such "games against gambling" with capital predators. Do not think that you are wise or fortunate to be able to copy the information to the end, and do not use household assets to play with leverage. Speculation is a game of capital. It must play first with capital. The role of oneself in the capital market is to surf or make waves. It is necessary to weigh and weigh the water before launching it.

The Anti-Uv Fabric is made of the common fabric after the latest UV-proof finishing. The shielding rate of the finished Anti-uv Fabric is â‰¥95%, which can effectively prevent the invasion and damage of the UV to the human body, and has the characteristics of non-toxic, non-irritating and washing resistance. The anti-uv fabric is non-toxic, safe to the human body, non-irritating to the skin, no allergic reaction, and has good moisture permeability.
Today's society pays more and more attention to the health of workers. Whether it is anti-static fabric or Flame Retardant Fabric, worker safety has become the core concern of many bosses.